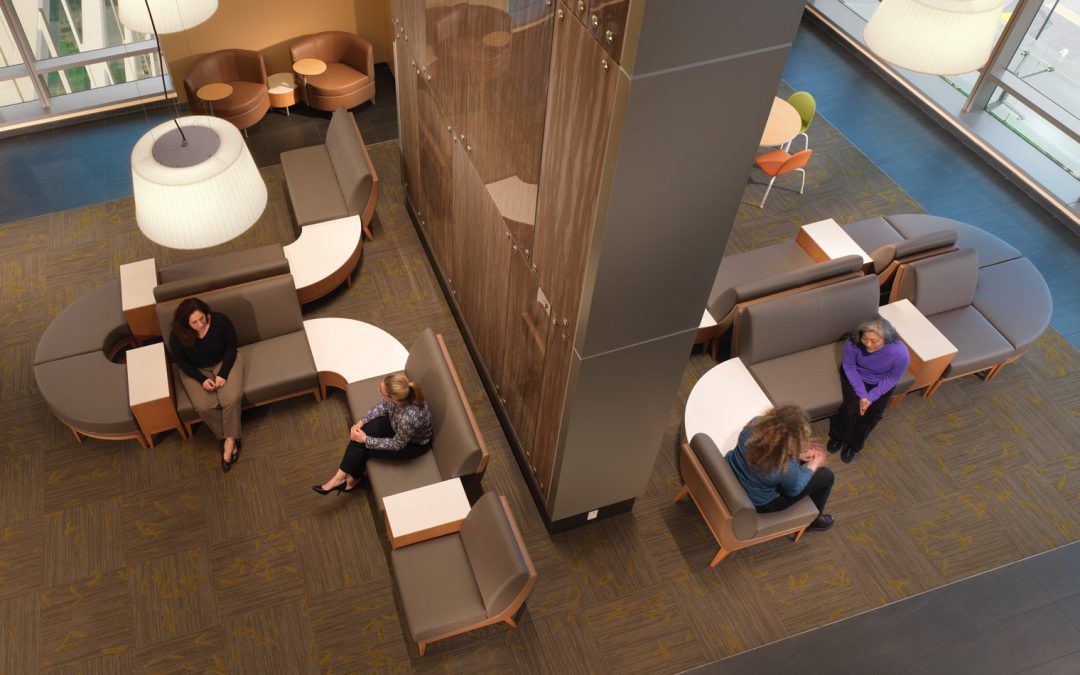 Facing a Furniture Dilemma
The UCSF Medical Center at Mission Bay opened its doors in February 2015 – a beautifully designed new state-of-the-art facility in San Francisco. But three years in, much of the facility’s furniture was showing serious wear. “There were rips and tears – and fabrics were looking bad,” says Brian Hassett, a member of the building maintenance team at the UCSF Mission Bay facility who volunteered to take on its furniture renewal program. “The wear impacted not only high-traffic areas like lobbies and cafeterias, but staff areas like breakrooms as well. It was surprising how fast things got bad.”

Before taking any steps, Hassett investigated the warrantees on the furniture – only three years old at that time. He discovered that the facility’s cleaning procedures – even the pre-COVID processes – voided the manufacturers’ responsibilities. COVID cleaning procedures would prove to be even harder on fabrics. So, Hassett faced a common dilemma, should he just “dump-and-replace-with-new” or try an alternative approach? “I cringed at that prospect,” he says. “Based on previous replacement projects, I know how much could not be renewed and went into landfills. I really hated it.”

Finding the Experts and Testing
Instead, Hassett talked to a facilities management colleague at the local Kaiser hospital who shared a trusted resource – commercial re-upholsterer, Kay Chesterfield, Inc. After getting Kay Chesterfield’s bid on a test project, he did a one-for-one cost comparison on a several pieces. To his relief, Hassett determined that re-upholstery would be less expensive than new replacements without even considering the costs of waste disposal and impact on natural resources. “Not only was it cheaper and better for sustainability issues, but the re-upholstery process had a shorter turnaround time than ordering new.”

The Kay Chesterfield team has had a terrific relationship with Kaiser and was very pleased to get their endorsement to create a test project bid with UCSF. “We were thrilled to help UCSF,” says Valerie Webb-Hamilton, senior project manager at Kay Chesterfield. “UCSF had selected some excellent furniture choices for their facility, but the fabrics and some of the structures just weren’t suitable for high traffic and rigorous cleaning procedures.”

Kay Chesterfield didn’t just look at fabrics when they evaluated UCSF’s furniture. Says Webb-Hamilton, “We always make a seam assessment for high-wear seating, because that is where the fabrics are most vulnerable and impact the entire piece. There are several stitch and structure options available for high-wear, high-traffic seating.” In the end, Kay Chesterfield suggested moving seams on a number of pieces that received too much ongoing friction – thereby extending the pieces’ lifespans.

Establishing a Sustainable System
The outcome of the UCSF Mission Bay re-upholstery campaign is impressive. The test batch of re-upholstered pieces have out-performed their original fabric predecessors – with no failures even after four years. The forethought that Hassett and his Kay Chesterfield team put into the re-upholstery process has paid off. The fabrics that tested well against the hospital’s cleaning chemicals stand up to even the rigors of COVID cleaning.

Following the initial test, Hassett put a systematic approach together to re-upholster all the facility’s furniture on an as-needed basis. Because of the size of the facility and its furniture portfolio, Hassett estimates that he has one piece go bad every single day. As a result, he is in an ongoing relationship with the Kay Chesterfield team.

Hospital staff, leadership and even patients have been thrilled with the outcome of this process. “Some didn’t even recognize the pieces when they were put back in place,” says Hassett. “They thought they were new. When they learned that we had renewed our existing furniture and didn’t just throw the old away – they were even more excited. Nobody wants to contribute to the waste stream – especially when the outcomes are so beautiful.”

Sharing the Win-Win
Hassett’s furniture program has been so successful – from the cost, design and constituent happiness perspectives – that UCSF has set up a cross-UCSF protocol team to adapt the Mission Bay re-upholstery program to its other two Bay Area hospitals and the university campus. “In the end,” Hassett says, “we are in much better shape with the reupholstery initiative than anyone really expected. Our furniture is lasting longer and looking better longer, and we have made major strides in reducing our waste footprint. Those are both huge wins for the facility.”